Cleaning up a former tarmac plant in Zoetermeer.

A tarmac plant in Zoetermeer was moved to a more appropriate location. Assessment of the former plant site revealed that the soil was impacted with PAHs & TPH and groundwater was contaminated with TPH, BTEX and chlorinated solvents. Due to regulatory pressure, the site owner was forced to clean up the site. Shallow contaminated soil was excavated and hauled to a treatment plant. Soil was treated by thermal desorption. This was not considered for the entire site because of excessive cost.

Groundwater was contaminated with dissolved dichloroethene and vinylchloride. Site assessment proved the contamination down to a depth of 10 meters. Time constraints limited the number of remedial solutions. Due to geological aspects dig and haul was not an option because of cost (shoring required). Bioremediation was not considered an option because of time limitations. Standard technologies like soil vapour extraction and airsparging weren’t considered effective because of the site lithology. Soils were heterogenic and mainly low permeability. ERH was selected to treat the impacted zone. A lumpsum contract was negotiated at € 31,–/ton and included complete installation and operation, energy consumption, monitoring and evaluation.

The contaminated area was oblong shaped, 63 meters long and 16 meters wide. The water table varied between 0.6 and 1.1 meters below grade. The contaminated zone was determined from the water table down to a depth of 10 meters. In total 9.000 m³ of soil volume was treated over a period of 28 weeks. Remedial goals were set at 10 ppb for dichloroethene and 2.5 ppb for vinylchloride. For temperature monitoring 11 thermowells were installed with 3 to 5 thermosensors each. For groundwater monitoring 12 wells with screens between 2-3, 5-6 and 8-9 m-bg were installed. 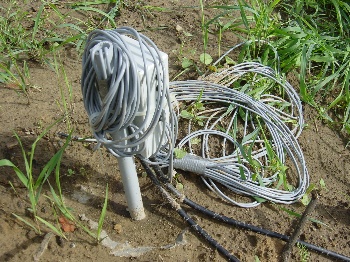 Installation started in November 2003, heating for the first phase started mid-December 2003 and the third & final phase ended at the end of May 2004. The heating system consisted of 43 electrodes with a conductive interval between 1.25 and 9.5 mbg. Soil vapors were extracted at the screened electrodes and by a horizontal drainage system. A 500 KVA power supply was used to heat the site. Due to power limitations, it was decided to split the site into three equally sized parts and heat in 3 phases. A total of 1.200.000 kWh was applied to the soil (135kwh/m3) to reach the remedial goals.

After the site was declared clean, trenching was done to check on the horizontal well system. It appeared the system was still intact. Image of the post remedial trenching can be found below.

Want to know more about
this Case Study?