The EU contractor in

Rapid and efficient in-situ soil and groundwater remediation, yes, it is possible also in low permeable or heterogenic soils. Ever been disappointed with remedial results? We were in the past and therefor mastered ourselves in applying thermal soil remediation since 1999. We apply Electrical Resistance Heating (ERH) preceded by Six Phase Soil Heating. It was Nocon that initiated and executed the first thermal soil remediation with the use of electrical power.

We initiated the first ERH project in Europe in 2002. Licensed by Current Environmental Solutions, a joint venture between Battelle’s memorial institute and Terravac LLC. Nocon has strongly contributed for market acceptance of thermal remediation in Europe and has completed many successful ERH projects.

Get a free quotation
for your project with
Nocon expertise.

Would you like to know if we’re a fit for your project?
Fill out this form and we’ll contact you as soon as we can.

ERH has particularly added value for source zones at which DNAPL is present, if time is a strong driver and if soils are considered difficult to treat as for their low permeability.

Soil heating strongly effects the kinetics of many organic contaminants like benzene, trichloroethene and perchloroethene. Due to changes of vapor pressure and Henry Law many contaminants can be removed more rapidly and far more effectively.

Heating of low permeable clayey or loamy layers can be achieved effectively with the electrical based technique Electrical Resistance Heating. Nocon has state-of-the-art experience at many European sites with engineering and operating the required systems.

The remedial system consists of steel electrodes for heating and plastic extraction wells, to remove the mobilized contaminated gasses and fluids. Electrodes are energized, voltage and ampacity are regulated between electrode couples. As electrical current is induced, soil heats up as it acts as a resistor. Subsurface temperature rises until the boiling point of water or to the boiling point of an azeotropic mixture (DNAPL and water), which on many occasions is lower than that of sole water or sole DNAPL. In this respect the heat propagation indicates whether DNAPL has been removed sufficiently. The contaminated gasses and fluids are extracted and transported to cooling and treatment units.

The effects of increasing subsurface temperature is monitored via various mechanisms and devices. First of all and paramount is the need for equal heating throughout the treatment zone. Therefor the power consumption per electrode is monitored and analyzed.

The goal of each thermal soil remediation project is to increase the subsurface temperature of course. Progress is monitored with thermal sensors located in thermal wells. Data acquisition results in graphs showing the temperature to rise in the various soil layers, anomalies help to understand the adjustments required for equal heating.

The ultimate goal is removal of the contaminants, often via gas and/or steam extraction. Nocon has developed a system with a gas chromatograph such that every 3 minutes a gas sample is analyzed. The high-quality gas sampling, combined with digital flow metering allows us to determine extreme detailed mass removal. This mechanism allows timely stop criteria; hence saving energy, time and thus money.

Thermal soil remediation has long been considered as “non environmentally friendly” due to the significant power consumption. But the world around us rapidly electrifies. The transition to electrical cars and abandoning fossil fuels for house heating are two great examples. In that respect electrical resistance heating for thermal soil remediation can be considered green when driven with solar or wind power.

Compared to Thermal Conductive Heating (TCH) the power consumption for our technique is even better, as heating elements for TCH must be heated to 250-300 degrees Celsius. ERH is being applied at a maximum of 100 degrees Celsius.

Nocon has mastered the process of heating such that power consumption is minimal and can be as low as 120 kWh/m3. Compared to TCH our technique requires a power drop only half the size.

Would you like to know more about
Thermal Soil Remediation?

One of our key competences

We love the odd project, doesn’t matter if it is indoors or outdoors, if it is only 5 drillings to 4 meters or as big as 400 and 20 meters deep. With one of our 4 drill outfits, 1 rotosonic machine and 3 Geoprobe’s, we can serve any project or place throughout the entire EU. We love to work in our home country but always enjoy when we’re asked to travel to Scandinavia or the Mediterranean or anything in between.

Read all about Direct Push Injection 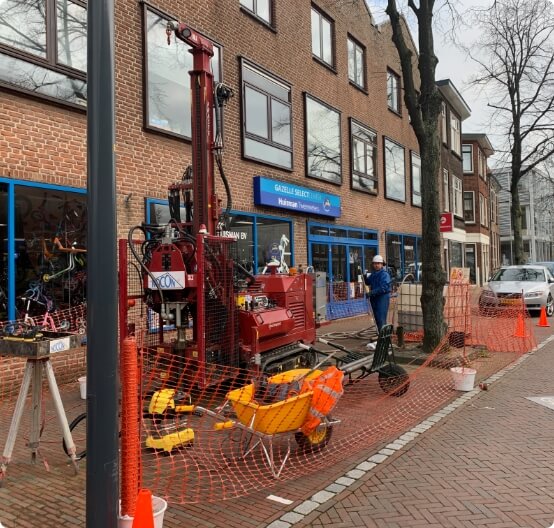 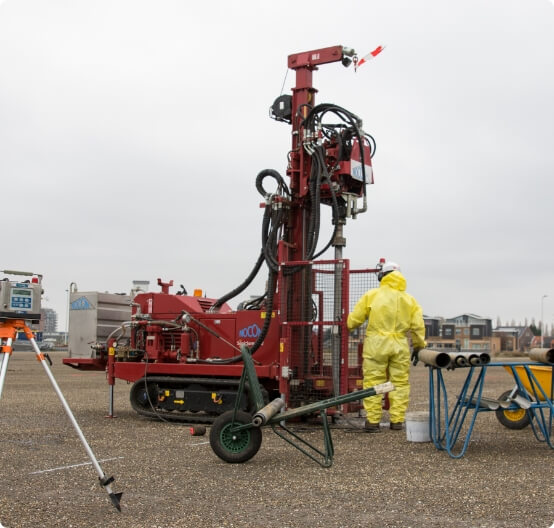 With our small rotosonic rig (only 4,5 ton) it is possible to perform discrete soil sampling at a rate that is phenomenal. We are using our Aqualock™ system to sample at 100 degrees Celsius for our ERH projects, but also to survey sites in Sweden or Denmark in moraine clays. Tilted wells under a pipe bridge? No problem!

Read all about Environmental Drilling