Economic drivers such as production efficacy made the client decide to concentrate production. As a result, business ceased at this site, Site assessment learned that both soil and groundwater were impacted with chlorinated solvents (ethenes and phenols). The site is positioned in a residential area with high redevelopment potential. Standard remediation technologies like soil vapor extraction and airsparging weren’t considered effective, mainly because of the site lithology. Soils are heterogenic and mainly low permeable. After convincing the owner Electrical Resistance Heating (ERH) might be a cost-effective technology, a pilot test was performed. Goals for the pilot test were both technical and regulatory and ultimately results give input for engineering and cost estimates of a full scale ERH remediation project.

From a technical point of view the pilot reveals information like optimal electrode distance, electrical soil capacity, remedial efficiency of the chlorinated phenols and the optimal soil vapor extraction system. Soil and groundwater are contaminated with dissolved chloroethenes (PCE, TCE, DCE and VC) and chlorinated phenols (PCP, TetraCP, TriCP, DCP and MCP). The pilot remediation has been performed near the most contaminated source zone, a former dump site. The highest concentrations were 170.000 ppb for PCE and 7.800 ppb for PCP THE pilot area was one hexagonal shaped SPH™ array with 7 electrodes (1 neutral in the centre of the array). The conductive interval was set between 1.5 and 3.5 m-below grade. The watertable was at approx. 1.8 m-bg. 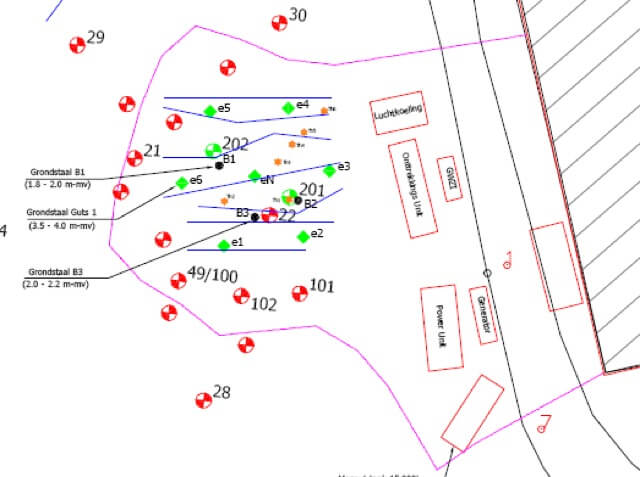 Installation was performed mid-July 2004 and heating started within a week. The heating process ended at the beginning of October 2004. AFTER the heating period (10 weeks) all data were analyzed to optimize the design for full-scale remediation. Main conclusions were: – soil, a very typical kind of clay, was extremely conductive, – remediation of chloroethenes was excellent; – remediation of chlorophenols needs to be combined with chemical oxidation, pump and treat or some excavation; – as chlorophenols are only limited to a small part of the site a full-scale SPH™ operation is feasible; – in most parts of the full-scale operation vertical extraction will be sufficient. Both the client and the Belgian government have experienced the speed and other advantages of ERH remediation. After funding is arranged full-scale remediation can be executed.